Remains of communism architecture in Prague, by Paulina ZAPOTOCZNA

ILEPS International Week in Prague was not only about projects, work and studying but also included some touristic part. We had in plan two walking tours guided by our Erasmus students from Poland. We started with first tour about communism architecture. Our meeting point was at Namesti Republiky (marked with purple) next to Palladium shopping center and then we took a tram to the other side of the river (continuing with purple).

We left the tram at first stop after crossing the bridge and walked to Letenske Sady (pink on the map). At the beginning, our guide – Paulina, started with small introduction to give us a little bit of history of Czechoslowakia under communist regime.

On February 25th of 1948, Czechoslovakia, until then the last democracy in Eastern Europe, became a communist country, triggering more than 40 years of totalitarian rule. Communist ideology permeated citizens’ lives and dominated all aspects of society. Czechoslovakia’s political decisions were dictated by the Soviet Union. Those who did not obey their orders were not only interrogated, intimidated and put under surveillance but also subject to house searches.

The Stalinist 1950s and the show trials

During the beginning of the brutal and nightmarish 1950s, Soviet Union Premier Joseph Stalin directed the Czechoslovak communists to carry out purges (extermination), and the nation held the largest show trials in Eastern Europe. Over a six-year period, from 1949 to 1954, the victims included military leaders, Catholics, Jews, democratic politicians, those with wartime connections with the West as well as high-ranking communists. Almost 180 people were executed. There was no such thing as a fair trial as judges cooperated with the country’s leadership. The defendants, branded guilty before the trial began, even had to rehearse their testimonies in advance, as if it all were some cruel play performed on a stage instead of in a courtroom.

First secretary of the communist party Alexander Dubcek wanted Czechoslovakia to embark on its own individual path while maintaining a socialist government. The country experienced liberal reforms that allowed writers to demand that the purge victims of the 1950s be rehabilitated and allowed social and political organizations to be free of communist party control. The April 5 Action Program described what came to be referred to as « socialism with a human face. » It demanded full equality in economic relations between Czechoslovakia and the USSR and urged the Soviets to take their advisors out of the country. Dubcek and his followers wanted real elections for party officials with secret ballots. National minorities were represented in institutions, and strikes were legalized. Censorship was abolished on June 26th, 1968.

The USSR was less than pleased with the Dubcek-directed developments in Czechoslovakia. Negotiations between the Soviet Union and Czechoslovakia failed. On the night of August 20th-21th of 1968, 200,000 troops from the Warsaw Pact countries of the USSR -Poland, East Germany, Hungary and Bulgaria- entered the territory of their defenseless ally, as tanks crushed the liberal reforms of the Prague Spring in the largest military operation in Europe since World War II.

As the harsh communist policy of normalization set in, 20-year old Charles University student Jan Palach was dissatisfied with the resigned attitudes of citizens toward the regime’s severe policies. On January 16th, 1969 at 4 pm, Palach set fire to himself on Prague’s Wenceslas Square, protesting the lack of freedoms and the passivity of the citizens. With 85 percent of his body covered in third degree burns, he passed away three days later.

Czech and Slovak students were honoring students killed during the Nazi Occupation on November 17th, 1989, International Students Day, by marching through Prague in a peaceful demonstration. When they came to National Avenue, the police beat the students. This police brutality triggered what is today called The Velvet Revolution – the period from November 17th to December 29th, during which dissidents and students protested against the communist regime. Theatres went on strike, and from November 19th to late December demonstrations took place in Prague and other cities. Dissident playwright Vaclav Havel organized the Civic Forum, which openly challenged the Czechoslovak political system and demanded that all political prisoners in the country be released. On December 10th, the first largely non-communist government since 1948 was sworn in. Dubcek was named speaker of the federal parliament on December 28th, and Havel was elected president of the country on December 29th.

Tourists seeking communist history of the Czech Republic may have a hard time finding remnants outside of museums and bunker tours. This is because Czechs just about got rid of anything that reminded them of the occupation by the Soviet Union. Statues and symbols were quickly removed, and street and metro stop names were changed. But not all communist structures and Soviet reminders were removed. Some have been remodeld, and some stand as a memory of the hard times. 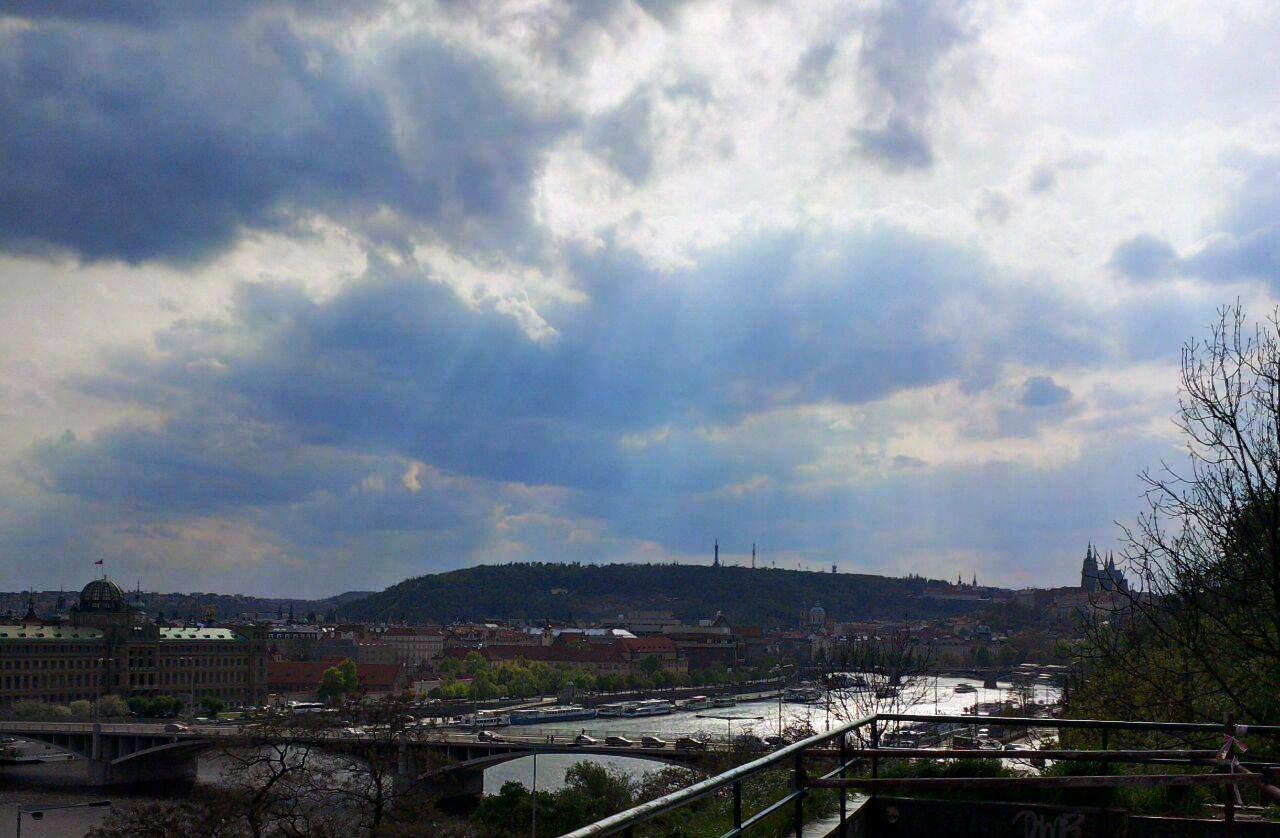 We were standing on a balcony with beautiful panoramic view on whole city and just behind us, there was a first building to see in our program (number 1 on the map).

The restaurant Expo 58 was built together with an exhibition pavilion, in order to represent former Czechoslovakia at the World Expo in Brussels in 1958. After the huge success at the exhibition, the building was dismantled and transferd back to Prague. The building was then used for its original purpose. The restaurant was sold in 1991 to a private owner and further changes of owners, problematic management and vandalism almost led to its destruction. In 2001, the building was restored. On the one hand, the restaurant was saved, but its purpose was changed as well. Also, the interior of the newly reconstructed building has nothing to do with the original one. Currently, the Expo restaurant is the domicile of an advertising agency.

Afterwards we were walking through Letenske Sady, beautiful park with vast areas of greenery, from time to time stopping to make another stunning photo. The park was located higher then level of the city so it gave excellent view on whole Prague. On the way we made small break to take a look at the photos prepared by our guide. Communist architecture was present in all areas of the city so it was obvious that we cannot see everything at one time. However we got good overview how architectural styles were changing with time:

Continuing our walk we finally reached heart of the park. Central place where nowadays there is a huge metronome. Originally it was not designed to be here, the plinth was made for much more important figure of past times (number 2 on the map).

The dictator gazed down from his plateau in the park, straight into the very heart of the Czechoslovak capital. It didn’t take long for locals to mock it with nickname ‘the queue for meat.’ Measuring 15.5m in height and 22m in length, it was the largest statue of Stalin ever built; and the largest group statue anywhere in Europe. The structure weighed a total of 17,000 tonnes and cost the city a small fortune to create. Even before the end of 1989, the Stalin Monument was blown up in 1962 after Stalin fell out of favor. It was eventually replaced by a giant metronome in 1991.

Nowadays it’s a great place to admire the city from above. When we took a careful look we notice one monument, a tower which was clearly disrupting peaceful line of the horizon.

The sci-fi-like TV tower is a communist era structure that is a prominent part of the Czech skyline. Like many of the communist-era building, locals hated the structure when it was first built. You can see the Žižkov Television Tower, now part of Tower Park Praha, from just about any part of Prague. The tower, standing at 216 meters, was built between 1985 and 1992. The observation deck at the top of the tower boasts a panoramic view of Prague. One of the unique characteristics of the tower are the giant babies crawling up and down the pillars. These were added in 2001 by famous Czech artist David Černý.

Leaving from Letenske Sady, we found the last spot for great photo shooting and went in direction of Royal Gardens, passing through Chotkowy Sady.

Arriving in the Royal Gardens we had a control at the entrance. Guard was checking each person very carefully and then we could peacefully walk around distinctly shaped lawns and bushes till we finally reached Ball-Game Court (number 3 on the map). Theoretically the Royal Gardens should have nothing common with communists and everybody could wonder why we were stopping there. Well, our guide explained everything.

The beautiful Ball-Game Court was built in 1568 with an embellishment of delicate, white sgraffiti. In the 16th century, ball games were a favourite pastime for nobles. The rules for the game were as follows: twelve players stood in a circle and struck the ball with a wooden bat. Sometimes only in their stockinged feet, they would bounce the ball to their opponent who was then supposed to catch it before it fell to the ground. The building is not itself an example of communist remains, but communists did leave their mark when the building was reconstructed in 1952. After the reconstruction, some noticed that in one corner of the sgraffiti, there is a woman holding a symbol of a hammer and sickle, the communist symbol for the working class. It is the personification of the « 5 Year Plan » (the communists’ five-year plan).

And finally we were on the way to our last stop: the Lennon Wall (number 4 on the map). Till this very moment we didn’t meet much tourists on the way, it was rather peaceful area in comparison to the center of Prague. Everything changed when we reached the place, so popular that it’s crowded with tourists no matter the weather!

This is the tribute to John Lennon. The Lennon Wall was not only a memorial for Lennon after he was murdered, but also a symbol for freedom and peace during the oppressive era of communism. Graffiti started appearing on the wall in the 1980s as a way for Czechs to express themselves. At first, it largely took the form of John Lennon quotes about peace, and lyrics lifted from songs by the Beatles. Over time it grew though – more graffiti appeared to denounce Czechoslovak communism, and the site became increasingly problematic for the regime. The government of Gustáv Husák denounced these young « Lennonists » as sociopaths, alcoholics and agents of Western capitalism. In 1988, it all came to head, as security police clashed with hundreds of Czech students near the wall. A year later, the dissidents would end up winning and the wall remains today as a popular forum for political counter-commentary. The original portrait of John Lennon has been lost beneath accumulated layers of paint, but in its place appear flowers and crosses, poetry calling for peace and love around the world. In recent years, the Lennon Wall has been painted with messages for Israel and the Middle East, for Ukraine, and in support of the rioters in Hong Kong. Buskers perform songs along the pavement while new visitors share their messages to the world in an ever-changing tapestry of kindness. 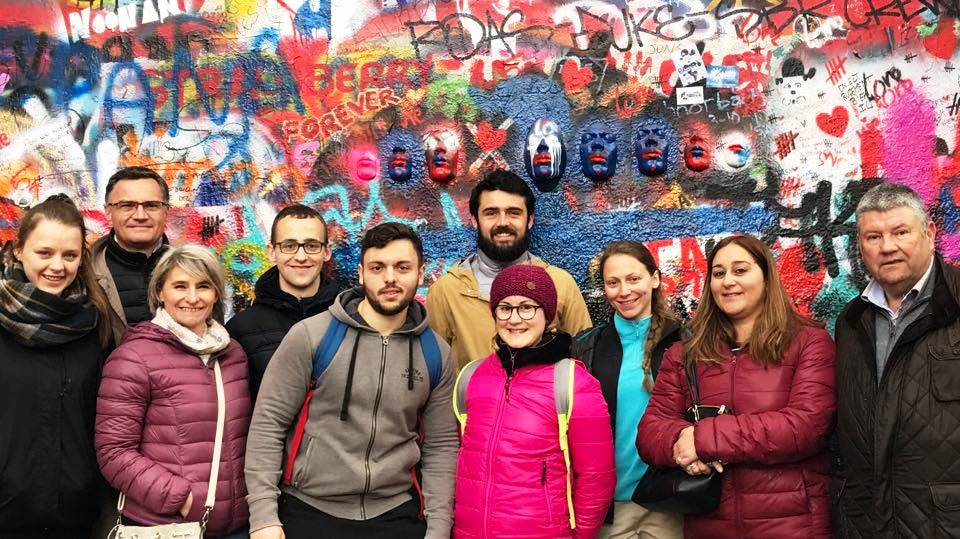