IN THE FOOTSTEPS OF CHARLES IV, by Gosia KOWALIK

Our tour in the footsteps of Charles IV took place on Thursday 27th April 2017 in Prague. Getting off at Karlovo namesti metro station we were in the center of Charles Square. A few words about our main character.

Charles IV is generally regarded as the « father of the country” in the Czech Republic. He was a highly educated man (he spoke five languages), an excellent diplomat and a very good king. He established Prague as the cultural capital of central Europe and made it one of the most prosperous European cities at the time. The Czech language was promoted to the official language in the country along with Latin and German, and the position of Bohemia became very strong. 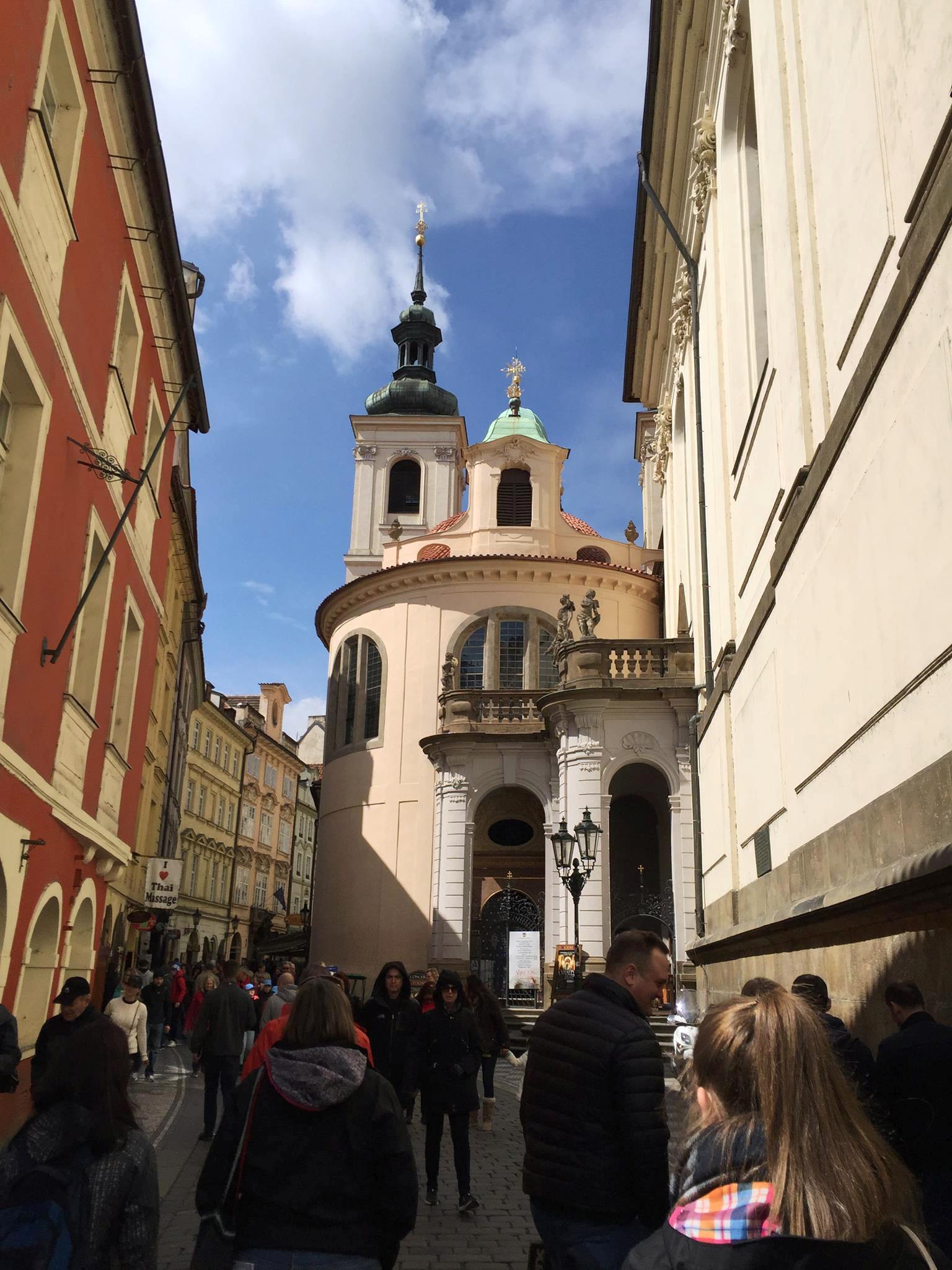 Later we went to Ovocný trh 3 street where is the rectorate of Charles University.

Charles University is the largest and the oldest university in Czech Republic. Founded in 1348 by king Charles IV, it was the first University in central Europe. It was sectioned into parts called nations: Bohemian, Bavarian, Polish and Saxon. Ethnically Czech students made 16-20% of all students. After World War II, communists had large influence on the university ideology. In the late 1980s did the situation start to improve. Demonstrations organised by students initiated the Velvet Revolution in 1989. Vaclav Havel – a writer, dramatist and philospoher – was recruited from the academic community and appointed president of republic in December 1989. Nowadays the academic facilities occupy many locations throughout the city of Prague and three of them are located in other cities. Charles University has 17 faculties including theology, medicine, pharmacy, law, arts, science, mathematics, physicial education and humanities. Collegium Carolinum is a complex buildings located in the Old Town, the seat of rector and academic senate. There take place academic ceremonies and graduations.

The next point of our trip was the house where the king was born.

Charles was born on 14th May 1316 in the House at the Stone Bell. This house, located at the Old Town square, is one of the finest examples of Gothic architecture in Prague. It was later rebuild in the Baroque and in the Neo-baroque style. Last reconstruction of the house took place between 1980 and 1987 when the house was given back its Gothic style. These days the House at the Stone Bell is the City Prague Gallery. 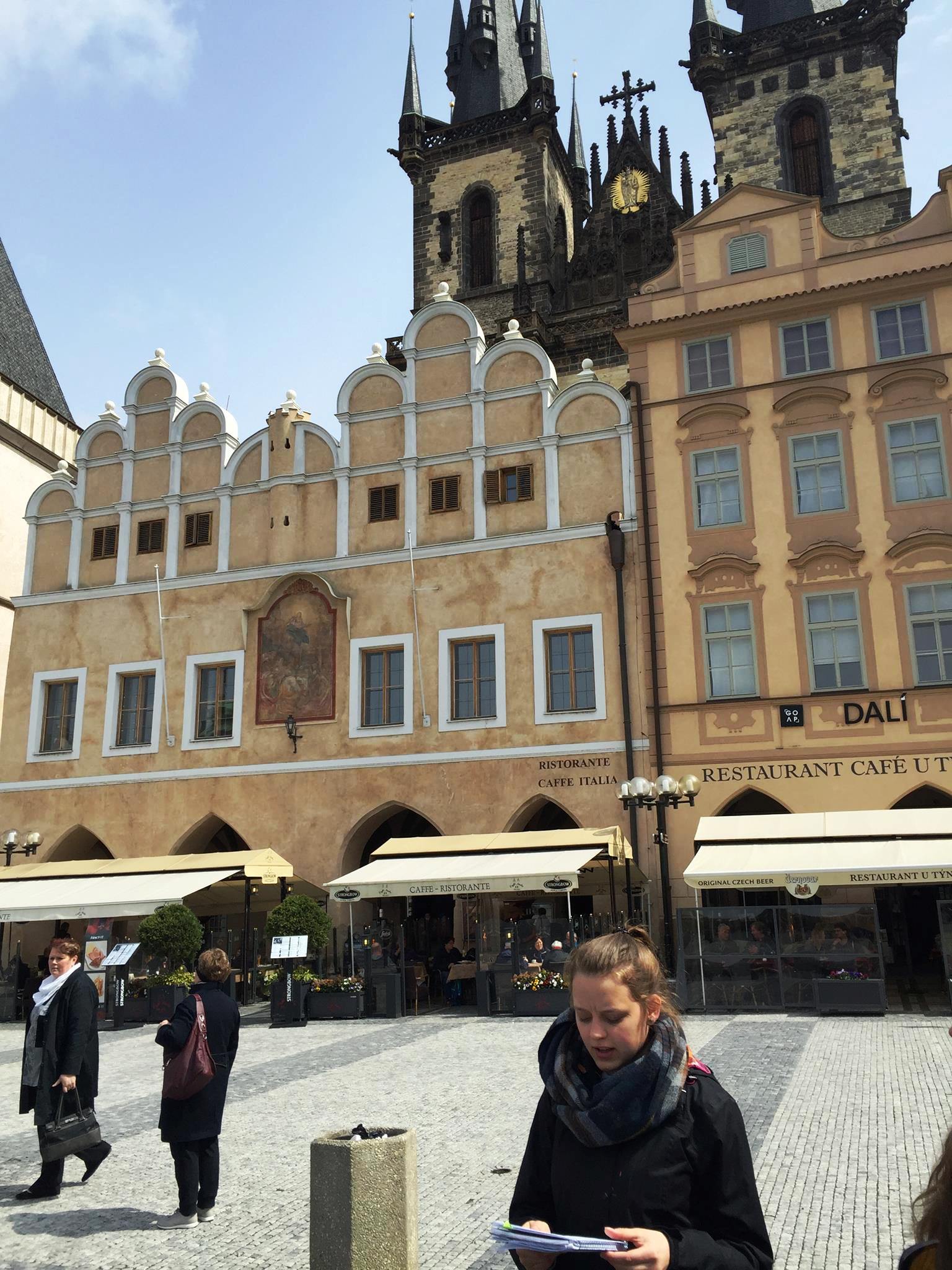 From the House at the Stone Bell we went to our last but not least point of trip – Charles Bridge. Just before the entrance to the bridge stands a huge monument.

A significant Neo-gothic monument based on the model of Arnošt Hähnel (a sculptor from Dresden) was made in 1848 for the 500th anniversary of the foundation of the Charles University. On the almost 4m high pedestal there are allegories of four faculties – theological, medical, legal and philosophical.

The city of Prague owes a lot of Charles IV – it’s easy to tell by all the “Charles” whatevers dotted around town (Charles University, Charles Square, etc.) But the most well-known namesake is definitely his Bridge. Dominated by a tower at each end, as well as 30 Baroque-style statues, the Bridge is the ultimate photo op, tourist stroll in Prague. Bridge crosses the Vltawa river and until 1841 was the most important connection between Prague Castle and Old Town. It is 621m long and 10m wide. According to legend, the first stone of the Charles Bridge was layed in 1357, July 9th, at 5.31am. These lucky numbers were given to King Charles IV by astronomers (135797531).

The statues we can see today aren’t the originals. Back in the 1960’s they were taken down and replaced – the originals now live out their retirement at the National Museum. Following is a list of the statues in order if you are travelling from the Old Town side to Malá Strana. 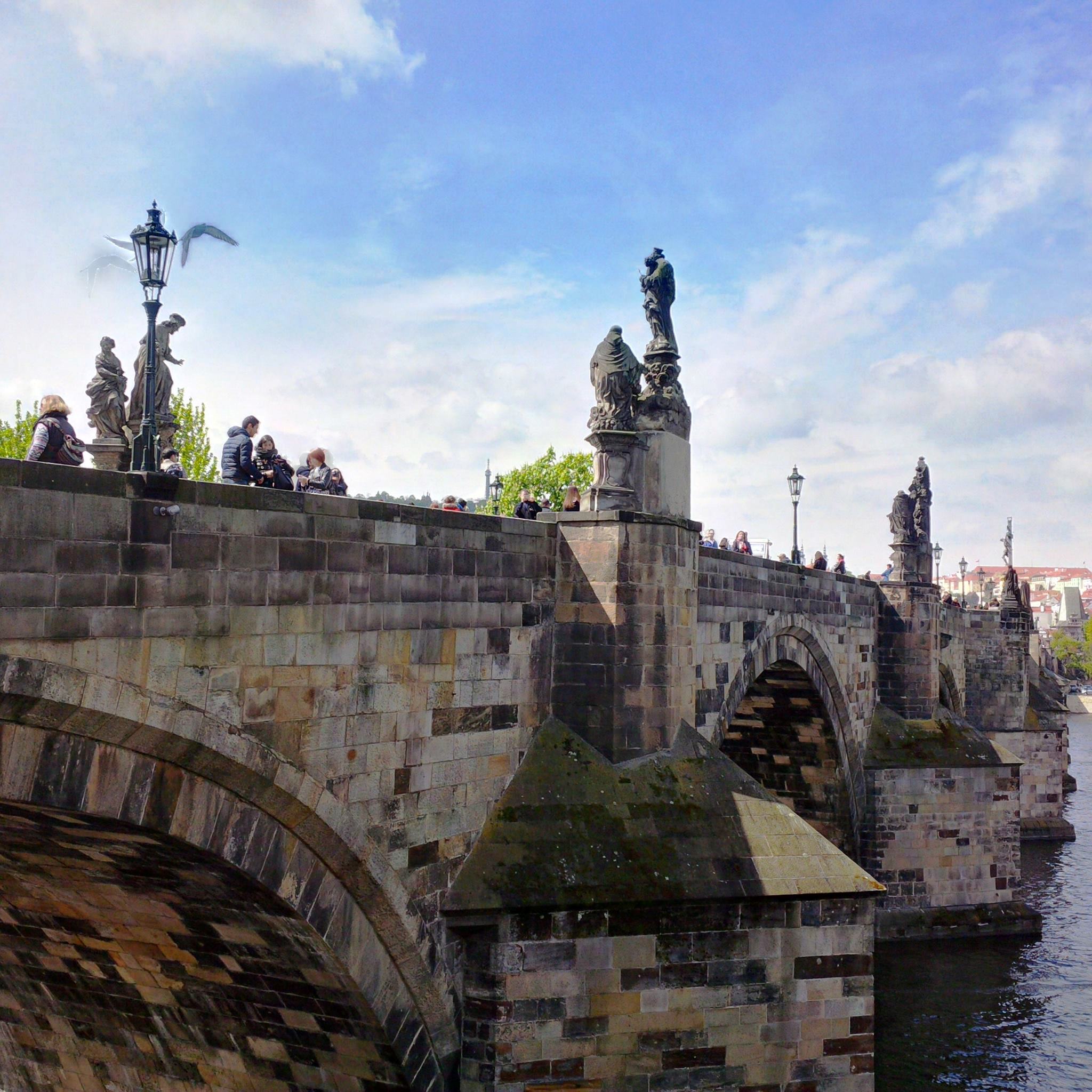 Statues on the south (left) side: 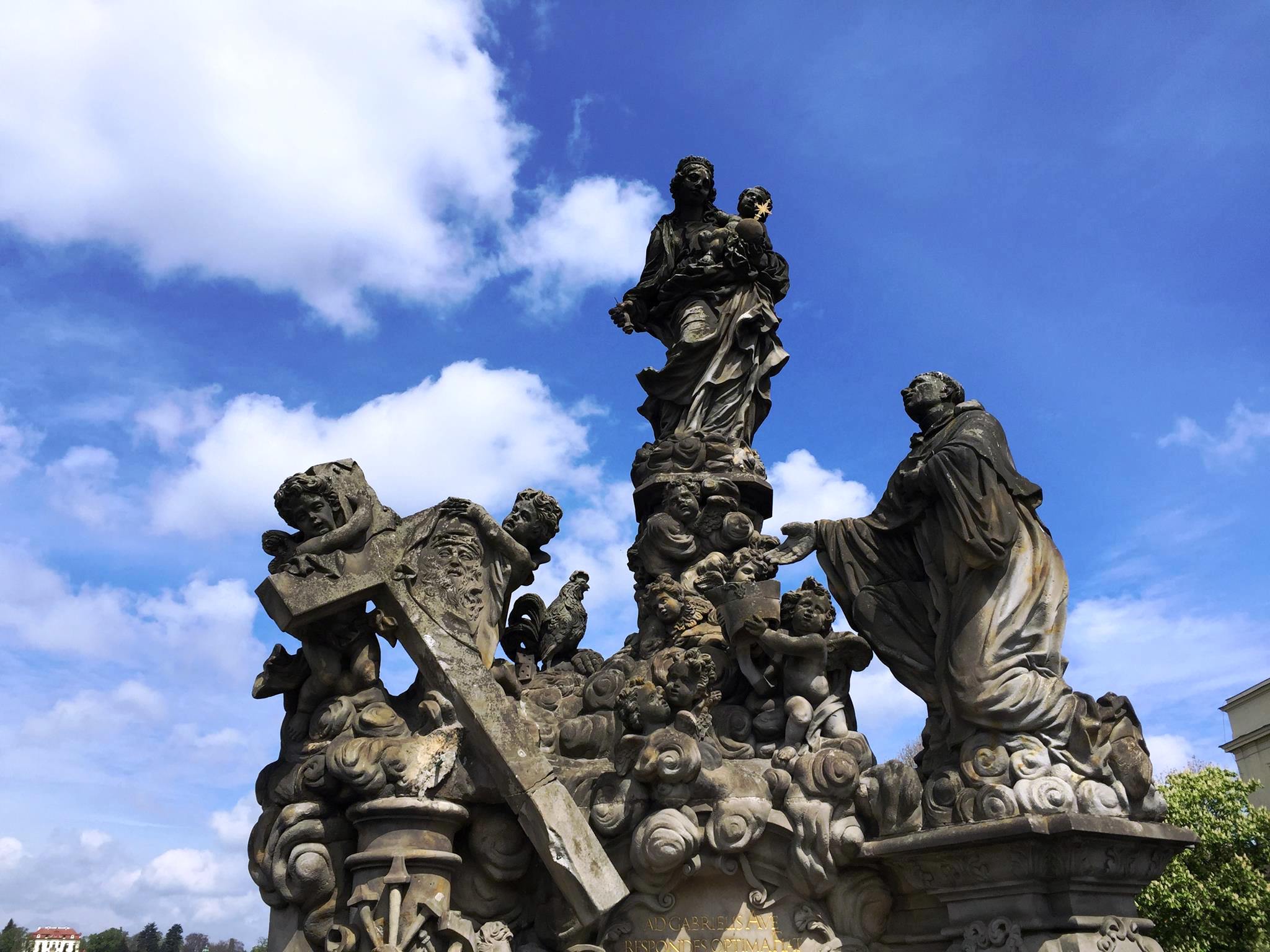 Statues on the north (right) side:

Here is the end of our tour in the footsteps of Charles IV. It is time to have lunch. 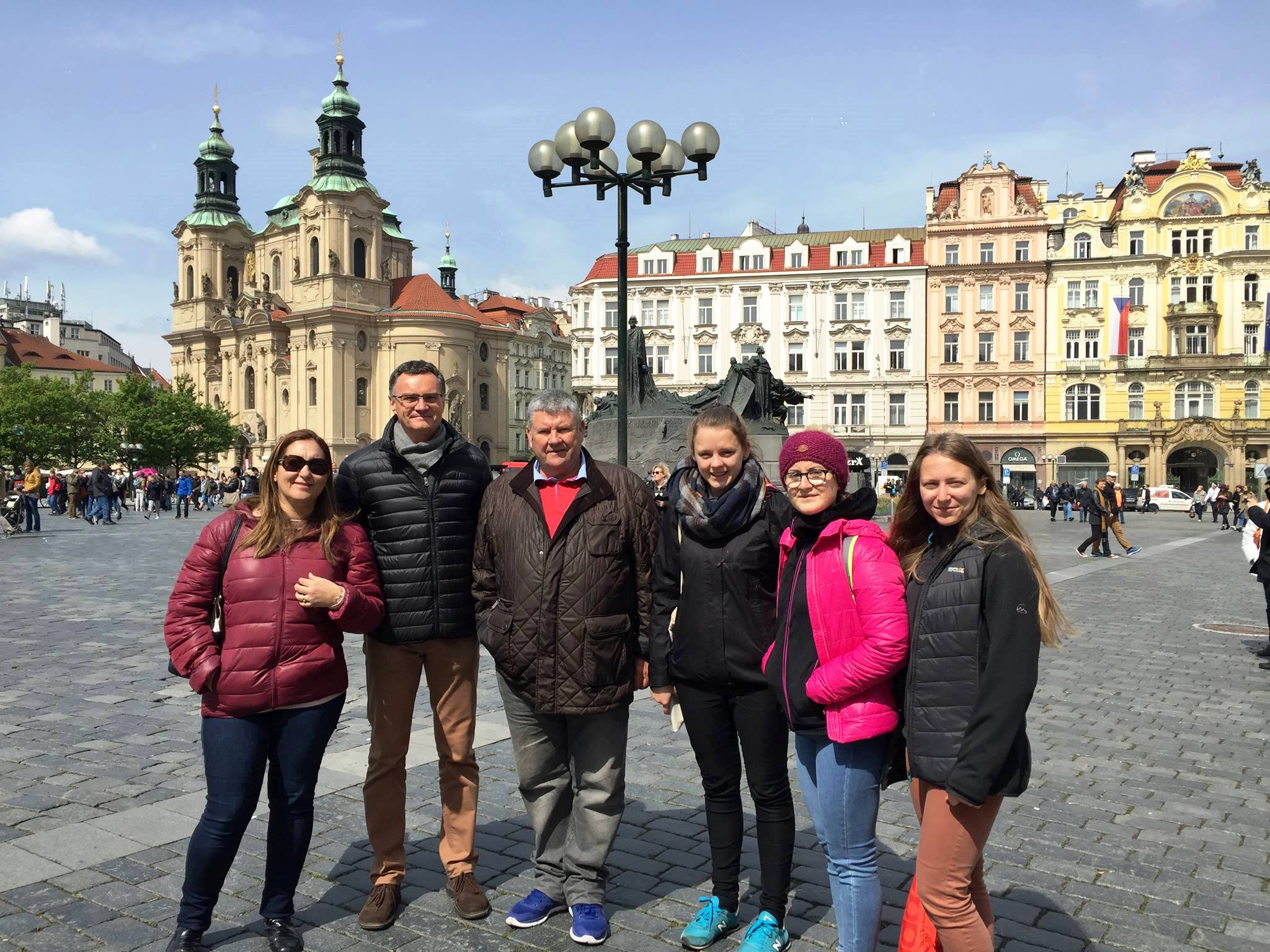